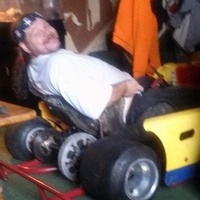 Walter “Walnut” Fegly, 47, of Fremont, passed away peacefully on Sunday, February 3, 2019 at ProMedica Toledo Hospital. He was born on October 7, 1971 in Fremont to Alfred Fegly & Patricia (Clay) Friend.

Walter was a driver for the Fremont News-Messenger. There was nothing that he considered “bad weather” and because of that, he became friends with many of his customers.  When he wasn’t delivering the paper, Walter would be outside. He loved to go fishing, hunting and gardening. Walter loved animals and enjoyed spending time with his horse, Lucky. He loved tinkering on all kind of vehicles and going to the movies. Walter was the master of the remote control and you could always find him watching Dr. Who, Harry Potter, or Star Trek. Most of all, Walter loved spending time with his family and making all the memories that he could with them.

Walter’s wishes to be cremated with no services will be honored by his family.

To order memorial trees or send flowers to the family in memory of Walter "Walnut" Fegly, please visit our flower store.