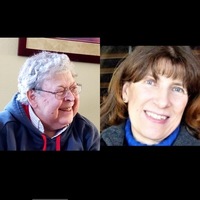 Tom was born on March 13, 1944 to the late George Clair and Pearl (Slaughterbeck) Zimmerman. A 1962 graduate of Fremont Ross High School, he went on to co-own the Swint-Reineck Corporation, working until his retirement in 2005.

Mary was born on August 29, 1950 to the late Paul M. and Kathryn M. (Harshman) McLaughlin. She graduated from Lake High School in 1968, and attended Bowling Green State University, graduating with a bachelor’s degree in business administration. She went on to teach at Old Fort High School, and later worked for Sandusky County Social Services, lending her caring nature to those who needed it most.

Tom and Mary were married in June of 1975 at Heatherdowns Church of the Brethren in Toledo, sharing 45 loving years together.

Tom was a member of the “Best People On Earth” Lodge #169, and frequently held court there to socialize and discuss world events with anyone who cared to indulge him, (which his many, many friends did – much to his delight). He was a formidable debate opponent as Tom was a voracious reader of many sources of news and information. Recently he'd lamented the proliferation of smart phones, which he said, “allow too many young people to fact check my lectures in real-time and call out the parts I BS my way through!”. Tom was an avid board game player and card player as well, allowing him to share his 'wisdom' with his very close friends around town. Tom's sense of humor and his conversation will be missed by many more people than he ever realized.

Favorite pastimes of Mary’s were visiting the Toledo Museum of Art, listening to the Toledo Symphony, and dedicating her time and love to her cats. Mary's passions for both the arts, and the animals, were ever foremost in her daily life. For years she cared for cats in her neighborhood, providing food and vet care for many, and a permanent home for those she could persuade to live indoors. She was especially attached to all of her four-legged “grandbabies”. Mary was overjoyed to combine her artistic talents and animal rescue interests by creating several items of artwork auctioned to support the humane society, and she donated generously to other groups. Mary was a lover of nature and much of her art reflected her enjoyment of the outdoors in photographs and graphics.

Mary and Tom were both very close to their family members and willing to help anyone they could in any way. They enjoyed family reunions and functions as opportunities to stay in touch, and Mary could always be counted on to help out during difficult times. In their own different ways, both Tom and Mary inspired, entertained, educated, and supported others and that is their legacy.

Thomas and Mary are preceded in death by their parents, G. Clair and Pearl Zimmerman; and Paul M. and Kathryn M. McLaughlin.

There will be no services at this time. In lieu of flowers, memorial donations in the Zimmerman’s names may be made to the Buckeye House Rabbit Society, the Humane Society of Sandusky County, or the Sandusky County Dog Warden's Sick Dog Fund. Keith, Kristi, and David are so very thankful to everyone who is helping us through this difficult time. We hope to schedule a graveside, memorial, or life celebration service to Tom & Mary at a later date.

Herman-Karlovetz Funeral Home & Cremation Services, Fremont has had the honor of assisting the Zimmerman family through this extremely difficult time.

To order memorial trees or send flowers to the family in memory of Thomas and Mary Zimmerman, please visit our flower store.