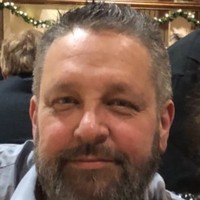 Steven Scherer, 55, of Lindsey, passed away on Saturday, October 26, 2019 at the ProMedica Toledo Hospital surrounded by his family. He was born in Fremont on February 26, 1964 to Charles & Evelyn (Burgess) Scherer.

Steven was a 1982 graduate of Fremont Ross High School. He worked as a draftsman at Honeywell for 35 years, until the onset of his illness. Steven enjoyed playing golf, watching football, cooking on the grill and spending time with his family.

Visitation will be held on Wednesday, October 30, 2019 at the Herman-Karlovetz Funeral Home & Cremation Services, Fremont from 4:00-7:30 p.m. where Funeral Services will begin at 7:30 p.m.  Rev. Joe Binkley will officiate.

Memorial donations may be directed to the family c/o Roxanne Scherer.

To order memorial trees or send flowers to the family in memory of Steven Scherer, please visit our flower store.