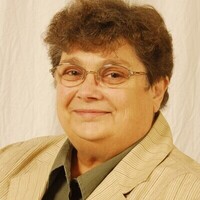 Sister Mary Lourdes Campbell died on September 2, 2021, in Fremont, Ohio.  She was eighty-two years of age and had been a Sister of Mercy for sixty-four years.  She was born on July 4, 1939, to Loretta (Gillespie) and Orville H. Campbell. The third of five children, she was named Janet Marie.  When the family moved to Auburn, they became members of St Joseph’s Parish and the children attended the parish school staffed by the Sisters of Mercy. Her older sister Carol joined the Sisters of Mercy in 1955 and Janet followed in 1957.  At her reception, Janet received the name Sister Mary Lourdes, a name she treasured because of her special devotion to Mary.  When she made perpetual vows in 1965, she chose “Let me sow love” as the motto to be engraved in her silver ring.  In countless ways, her life truly reflected her personal motto.

Sister Mary Lourdes earned degrees in history from Mercy College of Detroit and Eastern Michigan University.  She enjoyed the ministry of education as a teacher and as a principal.  She served in Michigan’s Catholic schools --- in Cheboygan, Lansing, Berkeley, Big Rapids, Cadillac, Rogers City, Prudenville --- for over forty years.  She also served as principal at St. Maria Goretti School in British Columbia, Canada, a special experience she loved to share.  Sister Maureen McGarrigle, who joined the community the same year, recalled how much Sister Mary Lourdes ”enjoyed teaching her own students and, as a principal, she did all she could to support her staff.”

In the midst of those forty-three years, she enjoyed a two-year change of pace coordinating the community vacation house in Battle Creek. There her gifts of hospitality and her love of nature re-energized her as well as her guests.

When it was time to slow down after her years of active ministry, she and Sister Jeanette Schneider enjoyed three years of semi-retirement in Midland.  They visited homebound parishioners and brought Communion to them. They enjoyed times for short trips, fishing, reading, and prayer.  Many years later, she shared how hard it was to give away her fishing pole and gear.

After her years in Midland, she became an Assistant Caregiver with the sisters at McAuley Life Center praying with them and helping wherever possible.  Her increasing arthritis symptoms soon required the use of a walker and, in time, a motorized chair.  Her disabilities did not limit her energetic spirit or availability and she often welcomed guests, leading them through the halls with her Tigers’ pennant flying permanently attached to her motorized vehicle.

With the decision to sell the Farmington Hills property, Sister Mary Lourdes chose the option of moving to St. Bernardine Home, a Sister of Mercy Life Center in Fremont, Ohio.  On September 1, 2020, she was welcomed to a new phase of her life.  She lived there exactly one year and one day.  Although her declining health further limited her activities, she made frequent trips outdoors to enjoy the beauty of her new home.

Cherished memories of Sister Mary Lourdes reflect her abundant love for all of creation.  She especially enjoyed life as a Sister of Mercy and extended that love to all. Former students and families remember her love of nature, her abundant energy, and her capable approach to education.  Sister Elaine Sova recalled how Sister Mary Lourdes enjoyed cooking out of doors and, how sometimes on weekends, she would pack up her equipment and food, go to a nearby woods and enjoy nature in all its beauty.  Her love of nature can be seen in her original paintings --- mountains, rivers, high-flowing clouds, old barns, long trails --- each reflecting her free spirit.

Sister Mary Lourdes was an excellent cook and, when she lived nearby in Mercy Court, she often prepared a home-cooked meal and invited sisters to come for a feast.  She often prepared a pot of soup or stew and shared them with groups of sisters at McAuley Life Center.  Sister Pat Lamb noted how much Sister Mary Lourdes enjoyed eating out and would sometimes rise early, pick up several breakfast sandwiches and coffee at McDonalds, return to McAuley Life Center and share the meals in the gazebo, all the time watching for deer or a gaggle of Canadian geese to pass by.  As her ability to drive decreased, she would order carryout Chinese food or pizza and enjoy them with her sister Carol and friends.

Visiting Sisters often asked “Where is Lourdes?’  And the response might be ‘She’s out on the grounds or down at the bridge feeding the fish.”  Other times it would be “She’s in the chapel” or “She’s visiting a sick sister.”

Sister Mary Lourdes is survived by her sister Barbara LeLonde of Midland, her brother Harley in Florida, several nieces and nephews, many colleagues and friends as well as the Sisters of Mercy. Her sisters Joan and Carol preceded her in her return to God.

Private services will be held in Fremont at the St. Bernardine Chapel.

Funeral arrangements include a Mass of Resurrection on Friday, September 10th, at St. Bernardine Home, Fremont, OH and a Funeral Ceremony on Saturday, September 11th at Heeney-Sundquist Funeral Home in downtown Farmington, MI.  Visitation 9:00 to 11:00 am.  Funeral Ceremony at 11:00 am, followed by burial in Holy Sepulchre Cemetery in Southfield, MI.

To order memorial trees or send flowers to the family in memory of Sister Mary Lourdes Campbell R.S.M., please visit our flower store.