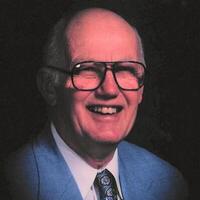 Robert "Bob" Parman died at home on November 10, 2021. He was born on May 12, 1924 in Hessville, Ohio. Growing up, he worked on the farm with his family and graduated from Gibsonburg High School. He served in the Army as a munitions supplier during World War II, primarily in Germany. When he returned to the states in 1946, he was lucky enough to meet Hazel Swihart at a Valentine's dance. They married on May 29, 1948.

Bob worked as a letter carrier for the US Post Office. He enjoyed bowling, playing in a league from 1955 through 2017. He was inducted into the Fremont Bowling Hall of Fame in 2013. He enjoyed community service through the American Red Cross, Meals on Wheels, and Habitat for Humanity and St. John's Lutheran Church. He enjoyed woodworking and made "faith chests"to be presented for those who were baptized or confirmed at his church. Personally, he enjoyed his family vacations, visiting family members across the country, and helping wherever he could.

He was preceded in death by his parents, Harman and Luella Parman, his brothers, LeRoy, Frank , Arthur, Orlin, Howard, Wilbert, Earl, and Glen Parman, and his sisters, Marian Boardman and Phyllis Leow. He was also preceded by a son, Ronald Parman, and a grandson, Case Parman.

Visitation will be held at St. John's Lutheran Church on Tuesday, November 16, 2021 from 9:30am-11:00am where Funeral Services will begin at 11:00am. Pastor Matthew Wheeler will officiate and burial will follow at Union Cemetery, Oak Harbor. The Herman-Karlovetz Funeral Home & Crematory has been honored with the care of Robert and his family.

In lieu of flowers, Bob has requested donations to St. John's Lutheran Church in Fremont, Luther Home of Mercy in Williston, OH, or to a cause of the donor's choice.

To order memorial trees or send flowers to the family in memory of Robert F. Parman, please visit our flower store.