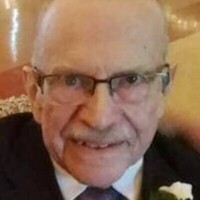 Rev. Jay M. Smith, 86, of Fremont entered into the presence of his Lord and Savior on Wednesday, December 30, 2020 at ProMedica Fostoria Hospital. He was born on June 28, 1934 in York Co, PA to John J. Smith and Isabel (Smith) Smith. Jay graduated from York High School and went on to further his education at Nyack College, Nyack, NY where he graduated with a bachelors degree in ministerial studies. It was there he met the love of his life Helen Knauth and they were married on November 17, 1956 in Willow Grove, PA. He worked for Nation Wide Insurance Co. after graduating from college and eventually went on to Asbury Seminary, Asbury, KY to receive his masters degree.

Jay was ordained by the Eastern PA district of the Christian Missionary Alliance denomination. He served as pastor in churches in Pennsylvania, Maryland, New Jersey, and Swanton, OH. After serving 50 years with the Christian Missionary Alliance, he was recognized with honors by the national office. He eventually became credentialed as a chaplain and moved to the Geisinger Medical Complex, Danville, PA, where he worked for 23 years managing the House of Care for oncology patients and serving as a chaplain for several nursing homes in the Danville area. He retired at age 75 and moved with his wife back to Swanton, OH to be close to their two daughters and their families.

Rev. Smith was preceded in death by his parents; a sister, Daphyn Savoia; and his two daughters, Carol (Smith) Barringer and Darla (Smith) Miller.

In lieu of flowers, m emorial contributions may be made to the Great Commission Fund of the Christian and Missionary Alliance, 8595 Explorer Dr., Colorado Springs, Colorado 80920 in honor of Rev. Jay M. Smith.

A private family graveside service will be held with Pastor Glenn Merrill of the Fremont Alliance Church officiating and burial at McGormley Cemetery. A memorial service will be held at a later time. The Herman-Karlovetz Funeral Home in Fremont, OH has been entrusted with his arrangements.

To order memorial trees or send flowers to the family in memory of Rev. Jay M. Smith, please visit our flower store.