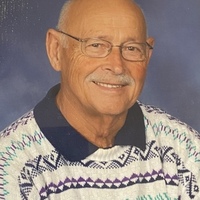 Paul L. Hammer passed away at Genoa Care Center on Monday, September 26, 2022 after a brief illness.

Paul was born November 2, 1936 to Macey and Clara (Magrum) Hammer in Helena, Ohio. He was the sixth of 11 children.

Paul met the love of his life, Barbara, on the tennis courts at Rodger Young Park in Fremont OH. They were married on October 20, 1956 and enjoyed over 55 years together before her passing.

Paul was a well-loved community member in Woodville, Ohio where he owned and operated the Village Barber Shop for over 50 years. He served as a Woodville Township Trustee for 12 years and had January 15, 2006 proclaimed “Paul Hammer Day” to honor him and his service to the Woodville community. Paul was loved by all who knew him.

During his time, he was active with his childrens’ 4-H projects, little league, children and grandchildren’s lives.​ There was no greater joy for Paul than to witness his children’s laughter and jokes. Paul was never without a smile, kind word or hug to those who were blessed to be a part of his life. His beautiful personality will live on forever.

Paul was a devoted Catholic and a member of St. Michael’s church in Gibsonburg. He was committed to his faith by supporting the church, saying the rosary, attending mass and praying his daily devotions. He consistently lived his faith in words and actions.

Coon hunting, ﬁshing, or walking in the woods is where Paul felt most at home and content. He saw God’s hand in the beauty around him and was most thankful for the blessings he was bestowed with each day.

Paul was preceded in death by his parents, Macey and Clara, wife Barbara and siblings Irene, Ray, Ruth, Kate, Carl and Mary.

Visitation will be held on Sunday, October 2 from 2:00-7:00PM at the Herman-Veh Funeral Home & Crematory, Gibsonburg. A funeral mass will follow on Monday, October 3 beginning at 10:30AM at St. Michael Catholic Church, Gibsonburg.

In lieu of ﬂowers, please consider donating to St. Michael Catholic Church, or to the Gibsonburg or Woodville Food Banks in Paul’s name.


To order memorial trees or send flowers to the family in memory of Paul L. Hammer, please visit our flower store.