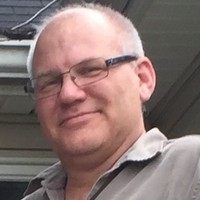 It is with deep and profound sadness that that we announce the passing our beloved husband and father, Michael Patrick Allport on March 29th at the young age of 55.

Michael was the second of 4 children born in Clarkson, New York on March 9th, 1965 to Carol (Wadsworth) and Leroy Allport. Mike and his family moved to Woodville, Ohio when he was young but spent summers in New York with his grandparents. Mike looked up to his grandfather like a father and he and his siblings, learned many things from him and he spoke of him often.

Mike entered the military the day after he graduated high school. He proudly served in the United States Army overseas, stationed in Germany. He had great respect for American values and those who served to defend them. He was an avid history enthusiast and loved talking about history, especially the WWII era. He knew so many facts and could talk on the subject at great length. He often wished he would have become a history teacher. He would have been the best.

Mike was always a loyal friend and could intermingle with any group of people throughout his life. He didn’t care who you were or what group you may associate with. He was willing to be a friend to anyone. He had a group of long-time, close friends that he loved like his own band of brothers with whom he gathered with every week. He loved playing games of all types with his friends and family, but he was known by some as a Dungeon Master for his enthusiasm for Dungeons & Dragons and role-playing games of all types. He was proud that his sons followed in his gaming footsteps and the enjoyment he got from it still shows among us and will be with us all forever.

Mike met the love of his life, Jill Lynnette Holliday, when his sister invited work associates of her husband to their Halloween party. It was truly a case of love at first site. One year later, October 27th, 1995 they were married at Salem Lutheran Church in Pemberville, Ohio and enjoyed over 25 years together and were rarely apart. Mike brought a daughter, Caitlyn, with him to form a family. Two sons were born to them: Connor and Duncan. Of all the things that Mike was good at, being a father is where he truly excelled. He was so proud of his children and loved them with all his heart. He was always trying to teach and guide them. He was also blessed with 3 grandchildren; Bobby, Wyatt, and Aria who brought him great joy.

He is preceded in death by his dad, Leroy Clifford Allport and his maternal Grandfather, Colin Morton Wadsworth and Grandmother, Arietta Jean (Johnston) Wadsworth.

A Celebration of Life will be announced at a later date.

In lieu of flowers, memorial contributions may be directed to Dysautonomia International at www.dysautonomiainternational.org, the American Heart Association at www2.heart.org or The Wounded Warrior Project at www.woundedwarriorproject.org.

To order memorial trees or send flowers to the family in memory of Michael Patrick Allport, please visit our flower store.