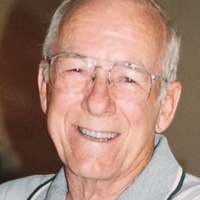 COLE, Kenneth L.  It is with great sadness that the loving family of Kenneth “Ken” Cole announces his passing on March 20, 2019, at the age of 90 years.  He passed peacefully in the arms of his loving wife.  He was proud to claim Jesus as his Lord and Savior and looked forward to walking through Heaven’s Gate to meet and rejoice with Him.

Ken was born in Tiro, Ohio on March 5, 1929.  He was a 1947 graduate of Gibsonburg High School and later pursued a degree in basic law enforcement.  He was preceded in death by his parents James Jacob Cole and Garnet Esther (Blaising) Cole, two sisters Esther (Arthur) Shull and Phyllis (Donald) Ahle, and two grandsons Anthony “Tony” Lanning and Phil “Peno” Gatt, Jr.

Ken’s life was never boring.  He was a young steeplejack, repairing and painting 100-feet tall water towers from Michigan to Texas.  He rode motorcycles, flew small planes, drove 18-wheelers, farmed and baled hay.  He rode his horse Ranger in tri-state rodeos and had a mantle full of trophies and ribbons at his Rocky Top home.  He and his beloved Donna traveled thousands of miles in their motor home, touching every one of the 48 contiguous states.  His sense of humor was well known and present up to his last breath.  Ken never met a stranger and could count his friends literally by the hundreds.

From his teen years working on the railroad with his father, Ken developed a strong work ethic.  He was proud to serve as a reserve deputy with Sandusky County for more than 20 years.  He was the maintenance supervisor at Chemitrol Chemical Company and when he retired after 30+ years, he drove big rigs for Reino Laundry.  He loaded and unloaded hundreds of pounds of supplies to hospitals in NW Ohio and Michigan – and loved every minute of it!  He finally decided to retire at the tender age of 83.

Most of all, he loved his family.  His children were dear to him, and he was happiest when surrounded by family.

Services will take place at Victory Church in Fremont, Ohio on Wednesday March 27.  Visitation will be from 9:30 a.m. to 11:00 a.m.  A celebration of Ken’s life will begin at 11:00 with Pastor Scott Robles officiating.

In lieu of flowers, memorial donations can be made in Ken’s name to The Cherry Street Mission in Toledo or The Lindsay Lions.  The family wishes to extend special thanks to the staff of Valley View Health Campus for their tender and loving care of our dad.

Interment will follow at a later date with the family at Washington Chapel Cemetery.

To order memorial trees or send flowers to the family in memory of Kenneth L. Cole, please visit our flower store.