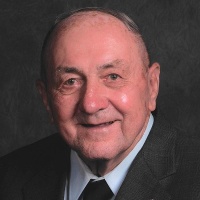 James L. Ripple, 83, of Fremont, passed away Sunday, September 1, 2019. He was born the son of William and Elizabeth (Dedrick) Ripple in Fremont on September 5, 1935. James was a 1954 graduate of Fremont Ross High School. He served in the United States Army from 1958 to 1964 during the Korean War. After receiving an honorable discharge, James worked as a survey technician for the State of Ohio until his retirement in 1994. He married Sandra “Sandy” Kosman on October 8, 1971 at St. John’s Lutheran Church. She preceded him in death on February 17, 2013. James was a member of St. John’s Lutheran Church, the American Legion, and loved to watch Ohio State and Cleveland Browns football.

Visitation will be held Wednesday, September 4, 2019  from 4pm to 7pm at Herman-Karlovetz Funeral Home, 900 North Street, Fremont, OH, 43420. Funeral services will take place on Thursday, September 5, 2019 at 11am with military honors being provided by the VFW and American Legion following the service at the funeral home. Pastor Matthew Wheeler will be officiating. Burial will take place at a later date at Oakwood Cemetery.

In lieu of flowers, memorial contributions may be made to St. John’s Lutheran Church.

To order memorial trees or send flowers to the family in memory of James L. Ripple, please visit our flower store.