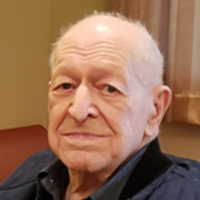 GENOA, OH - James Paul Crozier, age 96, died peacefully at Genoa Retirement Village on Friday, January 1, 2021.   Jim, the oldest of eight children, was born on August 13, 1924, to parents Dale and Leona (Freimark) Crozier.  Growing up in Elmore, Ohio, he graduated from Harris-Elmore High School in 1942.   He married Hattie Faye Noss on October 5, 1946.  Together, they cherished family and faith, lovingly raised five children, and celebrated their 50th anniversary before Hattie’s death on July 5, 1997.  They enjoyed spending summers at their cottage on Clark Lake in Michigan.

Jim was an active member of the former Elmore Christian Church, serving for many years as a trustee and board member.   He was a quietly compassionate man and helped many people in their times of struggle, without expecting anything in return.

Following in a long line of very mechanically-inclined Crozier men, Jim loved collecting and working on cars and could fix just about anything.  He was known as an excellent process instrumentation technician, and worked for Sun Oil Refinery for over 40 years, retiring as a Project Engineer.

He was preceded in death by his parents, wife Hattie, brothers William and David, and sisters Jean Crozier, Lila C. Wood, and Betty A. Riehm.

The family suggests memorial donations be made St. Jude Children’s Research Hospital, 501 St. Jude Place, Memphis, TN 38105.  An online fund has been set up at:  http://giftfunds.stjude.org/James_Crozier

Arrangements have been entrusted to Herman-Veh Funeral Home and Cremation Services, Gibsonburg, OH.

Due to complications with COVID-19, a Celebration of Life Service in honor of Jim will be held at a later time.

To order memorial trees or send flowers to the family in memory of James Paul Crozier, please visit our flower store.