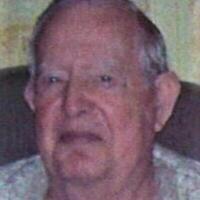 Henry “Ed” Breyman, 90, of Fremont, passed away at home on October 20, 2020. He was born in Fostoria, Ohio on April 13, 1930 to Henry and Alma (Cherry) Breyman. Ed graduated from Fremont Ross High School in 1948 and enlisted in the United States Navy and Navy Reserve on October 14, 1949. He served during WWII on the USS Maloy Destroyer and the USS Sarta Submarine until October 14, 1955 when he received an honorable discharge. On May 3, 1952, he married Betty Ann Karshuk at St. John's Lutheran Church in Port Clinton, and she preceded him in death on March 9, 2012.

Ed worked for Columbia Gas as a service man in Fremont. He was a member of Grace Lutheran Church where he served on the church council, the Zenobia Shriners of Perrysburg, was a Fraternal Member of the Eagles, Moose, Veterans of Foreign Affairs and American Legion, a member of the Masonic Brainard Lodge in Fremont where he was initiated, passed and raised as a Master Mason. He was a 32nd Degree Mason since 1965. Ed was also a member of the Ancient Accepted Scottish Rite Valley of Toledo, a scoutmaster for Boy Scouts Troop 307, a worthy patron for the Order of Eastern Stars, and Quarter Century Club member of Columbia Gas. He was also once awarded the McCarter Award by the Ohio House of Representatives for saving a child that had been choking. When Ed wasn’t dedicating his time and compassion towards his community, he enjoyed swimming, marching in the Zenobia Shriners Flag Unit and was a huge Ohio State football fan.

Visitation will be held on Wednesday, October 28, 2020 from 10:00 a.m. until 11:00 p.m. at Herman-Veh Funeral Home & Cremation Services, 319 W. Madison Street, Gibsonburg, OH, 43431. Use of a mask will be required to enter the facility and due to social distancing requirements, wait times may occur outside. A graveside service will follow at 12:30 p.m. at Greenlawn Memory Gardens, 1793 W. McPherson Hwy, Clyde, Ohio. It is requested that masks be worn at the cemetery. Lay Associate Minister, Maureen Pump will officiate. Military Honors will be provided by the American Legion and VFW.

In lieu of flowers, memorial donations may be made to Grace Lutheran Church, 705 W. State Street, Fremont, OH, 43420.

To order memorial trees or send flowers to the family in memory of Henry "Ed" Breyman, please visit our flower store.