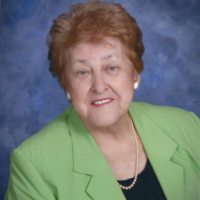 Helen F. (Thorbahn) Miller, 93, of Lindsey, passed away in the early morning of December 15, 2020 at Elmwood Assisted Living and Skilled Nursing of Fremont.  She was born on June 26, 1927 in Oak Harbor, Ohio to the late Fred “ Fritz” & Elsie (Hoffman) Thorbahn. Helen was baptized and confirmed at St. John’s Lutheran Church.  She attended Carroll Township School in Ottawa County.

In addition to being a homemaker, Helen was a true partner in her husband’s farming and animal husbandry.  She was employed at Standard Products in Port Clinton, Ohio and most, notably, as a 25-year School Bus Driver for Fremont City Schools (1968-1993).  Her memberships include Trinity United Methodist Church in Lindsey, Farm Bureau Council, and the Ohio Angus Ladies Auxiliary.  She was a Cub Scout Den Mother and a 4-H supporter.  She enjoyed attending her children’s and grandchildren’s athletic and music events, attending county fairs and Angus Shows, and traveling. She will be remembered as being the best hay bailing driver ever; her sugar cookies and pies; and hosting many family dinners.

The family asks that you attend services virtually via HermanFH.com under the Live Webcasts tab beginning at 11:00 AM Sunday, December 20, 2020. Rev. Travis Montgomery will officiate.

The family extends a special thanks to the administrative and nursing staff at Elmwood Assisted Living and Skilled Nursing of Fremont for the care provided to Helen over the past six years.

Those wishing to express an online condolence may do so by visiting:  www.hermanfh.com.

To order memorial trees or send flowers to the family in memory of Helen F. Miller, please visit our flower store.