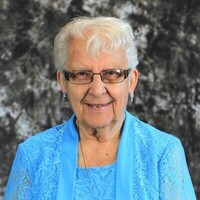 Helen was employed at Nuhfer’s Flowers in Gibsonburg, Noftz and Avers of Fremont, Lutheran Social Services, and Share and Care and the Sandusky County Food Pantry over the years.  She was a devoted member of Faith Lutheran Church, holding several offices in Church; was a Sunday School teacher; a chaired many functions at the church hall.  Helen attended meetings focusing on religious teaching in Columbus.

Along with her parents and beloved husband, Melvin, Helen is preceded in death by brothers, Thomas, Charles, Richard, Arthur, and James; and sister, Florence.

Funeral Services and burial will be private.

A Celebration of her life will be planned in the future.  It is strongly recommended, in lieu of flowers, memorial contributions may be directed to ProMedica Hospice. If you would like us to add your name to the families register book you may call us at 419-332-7391 or send personal condolences by visiting: www.hermanfh.com.

To order memorial trees or send flowers to the family in memory of Helen Diekman, please visit our flower store.