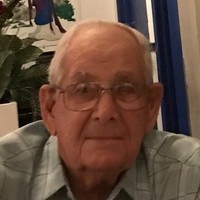 Glenn Richard Weyant, 91, of Burgoon and Bonita Springs, FL, passed away peacefully surrounded by his family on Thursday, Oct. 3, 2019. He was born on August 6, 1928 in Burgoon to N. Bruce & Helen (Humberger) Weyant.

Glenn was a 1946 graduate of Jackson Burgoon High School. After graduation, he continued his education at The Ohio State University and the Alexander Hamilton Institute. Glenn was employed at the Basic Inc. as a brick plant superintendent, retiring after working there for 40 years. He also retired as the Mayor of the Village of Burgoon after 32 years of service. Glenn was a member of the Burgoon United Methodist Church, the Fremont Moose, the Fremont Elks, the Bettsville American Legion, the Bonita Springs Eagles, the West Harbor Yacht Club and The Harbor Club in Bonita Springs. He was also a 60-year member of the Fremont Free and Accepted Masons, Chapter, Council and Commandry. Glenn was a member of the National Management Association, where he was the past President of the Basic Chapter, the past State Governor of the Buckeye Council and a Certified Professional Manager of the NMA.

Glenn loved living at the summer cottage on Lake Erie where he enjoyed fishing and boating. When the seasons changed, he spent his winters at their home in Bonita Springs. He was an avid OSU fan. Glenn’s favorite activity was spending time with his family and friends and making life-long memories with them.

In 1952, Glenn married the love of his life, Marilyn E. Frey in Gibsonburg and she survives. Also surviving are his children, Randal (Connie) Weyant of Winter Haven, FL, and Cynthia (Roger) Eidenour of Burgoon; 4 grandchildren; 8 great-grandchildren; and brother, Loren Weyant.

He is preceded in death by his parents and sister, Janet Humbert.

Visitation will be held on Monday, Oct. 7, 2019 from 4-7 p.m. at the Herman-Veh Funeral Home & Cremation Services, Gibsonburg where a Time of Sharing Memories will begin at 7p.m. Burial at Smith Cemetery, Burgoon will be at a later date.

Memorial Contributions may be made in honor of Glenn at the Bettsville Library, the Bettsville American Legion or ProMedica Hospice of Memorial Hospital.

To order memorial trees or send flowers to the family in memory of Glenn Weyant, please visit our flower store.