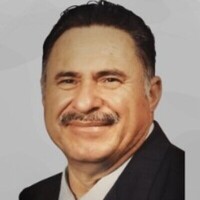 Elias Cabral, 78, of Fremont passed away on Sunday, October 30, 2022 in Toledo. He was born on January 17, 1944 in Torreon, Coahuila, Mexico to Juan and Everarda (Ayala) Cabral. After finishing his education in Mexico, Elias Joined the Mexican Armed Forces.

He married Maria Angela Reyes on August 30, 1964 in Cd. Juarez. That same year he became an ordained minister. In 1968, Elias brought his family to the United States to provide a better life for them. Upon settling in Fremont, he began working for the Norfolk and Southern Railroad. He continued his ministry as Assistant Pastor and Sunday School Superintendent at Iglesia Apostolica de la Fe en Cristo Jesus.

Elias leaves a revered legacy as being a true man of God. He was purposeful in placing the time and effort into his relationships with his family so they knew they were special and loved. He enjoyed doing yard work. And, if he wasn't working, you could find him playing guitar and singing Spanish Christian hymns or making someone smile and laugh.

He is preceded in death by his son, Joel.

Visitation will be held at the Herman-Karlovetz Funeral Home & Crematory, Fremont on Saturday, November 5, 2022 from 1-2 PM with Services beginning at 2 PM. Burial will follow at Oakwood Cemetery, Fremont. Food and fellowship to follow burial.
Memorials in honor of Elias may be made to the Alzheimer's Association.
To send an online condolence or to view Elias' tribute video, visit: www.hermanfh.com

To order memorial trees or send flowers to the family in memory of Elias Cabral, please visit our flower store.