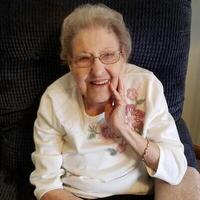 Deloris was born on November 19, 1919, to the late Ernest and Ella Nesbitt Wolfe. She was the youngest of twelve children and a lifelong resident of Fremont, living most of her life on Barker Road where she was raised.

Deloris attended elementary school at the location of the American Legion until Lutz Elementary was completed in 1929. After graduating from Fremont Ross High School in 1937, Deloris worked as a secretary for Crescent Manufacturing and at Wright-Patterson Air Force Base in Dayton during WWII. She married Charles Tolhurst on July 13, 1942, and accompanied him to training bases at Fort Benning, GA and Fort Walters, TX. Deloris worked at Union Carbide in Fremont while Charles served overseas.

Deloris actively volunteered at Fremont Memorial Hospital as a dispatcher for almost thirty years and was a member of St. Paul's Episcopal Church where she taught Sunday School and belonged to St. Katherine's Guild, helping with luncheons, craft fairs, and numerous community events. She also served as a lay reader and helped transport members to services.

Deloris enjoyed quilting, crocheting, and playing cards and was an avid Cleveland Indians fan.She also liked camping with her two sisters, especially at Mohican State Park and made many trips with Charlie in their airplane, including flights to Maine, Texas, Wisconsin, Michigan, Florida, South and North Carolina, and frequent trips to Georgia to visit family.

Deloris was preceded in death by her husband Charles of 56 years and all her siblings. She is survived by her daughter Janet Kirchoff (Steven), grandchildren: Laura Harper (Brian) and Allison Brewer (Kenneth), great grandchildren: Carolyn Harper and Catherine Martin, and several nieces and nephews.

The family would like to thank Bethany Place personnel and nursing staff for the care and friendship Deloris enjoyed as an 8 year resident, as well as support from Promedica Hospice, her St. Paul's Episcopal church family, Valley View Care Center, Dr. David DeFrance, friends, and neighbors.

Visitation will take place at 9:30A.M. on Tuesday, July 5, 2022 in the Guild Room at St. Paul's Episcopal Church, 206 N. Park Ave, Fremont, OH. Funeral services will begin at 10:30 A.M. in the church officated by Rev. Matthew Wahlgren. Services will be livestreamed via the link her obituary page at www.hermanfh.com In the event that there are broadcasting issues, services will also be recorded and archived on her webpage.

In lieu of flowers, the family requests donations be made to St. Paul's Episcopal Church, 206 N. Park Ave, Fremont, Ohio 43420.

Arrangements have been entrusted with the Herman-Karlovetz Funeral Home in Fremont, Ohio.


To order memorial trees or send flowers to the family in memory of Deloris Irene Tolhurst, please visit our flower store.