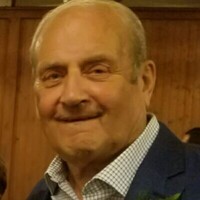 He was born March 9, 1939 in Fremont, the son of Walter and Florence Wasserman. He was a 1957 graduate of Fremont Ross and a member of the undefeated Fremont Ross Little Giants football team. Along with his teammates he was inducted into the Fremont Ross Hall of fame in 2018.

Dan was a veteran of the United States Navy and was commissioned on the U.S.S. Independence which was called on by President Kennedy during the Cuban Missile Crisis.

He retired from AEP/Ohio Power Company where he worked for over 36 years. His career with the company began as a ground man and ended as an area supervisor. Daniel loved traveling with Pat, touring the country in their motor home. When not traveling he enjoyed fishing and time on his boat, the “Jim Dandy”. Dan enjoyed entertaining and hosting BBQ’s , fish frys, making wine in his basement the “Wasserman Winery” and many fond memories with his “Grocery Shopping Crew”, hours of stories and laughter but no groceries to show for it.

He was frequently found with is grandchildren, helping with projects and attending their sporting activities. His great-granddaughter Amelia was the apple of his eye, he thoroughly enjoyed time spent with her.

Dan will be remembered for his ornery quick-witted personality and ability to make people laugh. He leaves behind a great legacy and a lifetime of memories.

Visitation will take place on Friday, January 28, 2022 from 2-4P.M. and 5-7P.M. at Herman-Karlovetz Funeral Home & Crematory, 900 North Street, Fremont, OH. A Funeral Mass will begin at 10:00A.M. on Saturday, January 29, 2022 at St. Ann Catholic Church. Burial will follow at St. Joseph Cemetery with military graveside rights. Memorial contributions may be made to the Terra College Foundation- Joseph Wasserman Memorial Fund. Online condolences may be expressed at www.hermanfh.com

To order memorial trees or send flowers to the family in memory of Daniel Ward Wasserman, please visit our flower store.