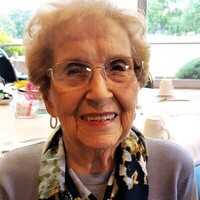 Clarabelle Widmer Garn of Gibsonburg died on September 19, 2021, at her home with her loving daughters by her side. She was born in Braley, Ohio, (Fulton County) on October 5, 1920, to Harvey and Nellie Widmer. She was raised on her family farm in Rollersville, Ohio, and attended Rollersville Elementary and then Gibsonburg High School where she was crowned May Queen her junior year. She graduated in 1939.

On November 13, 1943, she married her classmate and the love of her life James "Jim" Garn, traveling by train across the country to San Diego, California, where Jim was stationed in the Navy. In 1945, Clarabelle traveled back to Ohio to prepare for the birth of their first child, with Jim hitchhiking home from California and arriving just in time for the birth.

Aside from these few war years in California, Clarabelle lived her entire life in the Gibsonburg area. She and Jim raised three daughters. They enjoyed life long friendships, including membership in a couples' pinochle club from 1946-2005. They were active members in the Faith United Methodist Church, with Clarabelle holding many offices in United Methodist Women. She was also a member of Sorosis club.

Although Clarabelle and Jim lived their lives in Gibsonburg, they traveled the world, enjoying many adventures. Clarabelle was a master homemaker, creating a lovely and welcoming home for her family and friends. She enjoyed gardening, entertaining, crocheting and pie baking. But always, the most important thing to her was her family.

She was preceded in death by her husband of 62 years, James Garn in 2005, her parents Nellie and Harvey Widmer, brothers Earl Widmer and Wendell Widmer, son-in-law Bob Sweeney, and great grandson Stephan Kaseman.

The family would especially like to thank Geneva Melchor who lovingly cared for Clarabelle in later years allowing her to live in the home she loved. We can never fully express our gratitude to Geneva for the sweet and generous way she cared for our mother. We are also thankful for all the numerous caregivers who showed such kindness.

Memorial contributions may be given to Gibsonburg United Methodist Church.

To order memorial trees or send flowers to the family in memory of Clarabelle Widmer Garn, please visit our flower store.