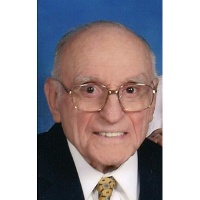 Born in Sandusky, OH on Oct. 14, 1923, Chuck was a son of the late Charles Holcomb, Sr. and Emma (Wertz) Holcomb.  As a 1942 Gibsonburg High School graduate, he furthered his education by attending Davis Business College.  That same year, he enlisted in the Army Air Corp during WWII, and was stationed in England.  His position in the Corp was a belly and tail gunner in a B24.  His plane was shot down over Europe and he became a Prisoner Of War, under the German Army.  He was subjected to and was an involuntary participant in the German’s “Black March” near the end of the war.  He was a POW for over 11 ½ months, until the war’s end.  He received campaign medals and the Purple Heart for his service to the country.

Chuck had a full life and will be remembered for being witty and light-hearted.  He enjoyed fishing with his family and golfing, being a member and league golfer at the former Bettsville Golf Course.  He and his wife, Carol, were regular patrons of Chud’s Restaurant in Fremont.  He spent time handmaking his model train display and collecting coins.  Chuck was a life member of the Helena Community Volunteer Fire Dept., the Gibsonburg American Legion, the NRA, the Sandusky County Sportsman’s Club and St. Michael Catholic Church in Gibsonburg.

As a career, he worked as a maintenance supervisor for the Peter Ekrich Company in Fremont.  He retired in 1985.

On Dec. 28, 1945, he married Carol Kirwen in the Parsonage of St. Michael Church.  They would have been celebrating their 74th wedding anniversary this winter as Carol survives in Helena.

Chuck is preceded in death by his parents; and sisters Margaret Myers and Jean King.

Memorials may be made to St. Michael Catholic Church.

To order memorial trees or send flowers to the family in memory of Charles "Chuck" Holcomb, Jr., please visit our flower store.