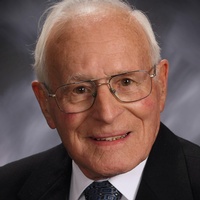 Carl was a 1943 Fremont Ross High School graduate, and in 1943, he joined the Army serving during WWII, stationed in the Rhineland.  He was wounded in France in 1944 and received the Purple Heart and Distinguished Unit Badge.  He was discharged in 1946.  Carl was a dedicated salesman at Spieldenner Floor Covering; retiring in 1990. Carl was a lifelong member of Grace Lutheran Church in Fremont, a member of the Fremont Exchange Club for over 64 years, an active member with the Habitat for Humanity and a member of Fremont VFW. He also enjoyed gardening.

Visitation will be held on Tuesday, November 6, 2018 from 2-4 p.m. and 6-8 p.m. at the Herman-Karlovetz Funeral Home & Cremation Services, Fremont. Funeral Services will be held at the Grace Lutheran Church on Wednesday, November 7, 10:30 a.m., where there will be an additional hour of visitation prior to the service. Pastor Jody Rice will officiate. Burial with Military Rites will follow at McGormley Cemetery, Fremont.

Memorials may be made to Grace Lutheran Church.

To order memorial trees or send flowers to the family in memory of Carl D. Cooley, please visit our flower store.