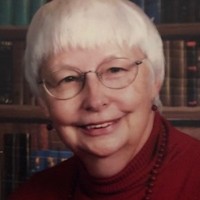 Anna Margaret Ottney Cain, 85, passed away on February 1, 2020 at Hospice of NW OH in Perrysburg. She was born on November 22, 1934 in Gibsonburg, Ohio, the daughter of James Norman Ottney and Anna Margaret (Driscoll) Ottney. Her stepmother was Pauline (Rice) Ottney. She married Joseph Carter Cain III on June 8, 1959 in Denver, Colorado, and they divorced in 1968.

Dr. Cain earned her baccalaureate degree in nursing at The Ohio State University in 1956, her master’s degree in psychiatric nursing at the University of Colorado in 1959, and her PhD in Human Development Education at the University of Maryland, College Park in 1972. A professor pf psychiatric nursing at the University of Maryland, Baltimore, Dr. Cain served as Associate Dean of the Graduate Programs and taught in both the graduate and undergraduate programs during her 30 years at the school. The Ann Ottney Cain Endowed Lecture in Psychiatric Nursing was established by students, faculty, alumni, and friends to honor her upon her retirement from the University in 1994. She received numerous other honors and awards throughout her career and was selected as a fellow of the American Academy of Nursing in 1972. Dr. Cain was a loving family member, an inspiring teacher, a caring therapist, and a loyal friend and mentor to many. Her optimism, warmth, wisdom, humor and love of life touched many lives. She challenged others to think and always pushed them toward growth.

Left to cherish her memory are her son, Jeffrey Cain, daughter-in-law, Sandra, and grandchildren, Phillip and Stephanie of Watchung, New Jersey, sister-in-law, Janet Ottney of Elmore, Ohio, 2 nieces and 5 nephews. She was preceded in death by her parents, stepmother, brothers, James B., Richard and Alfred Ottney, stepbrother, Jack Vian, and nephew, James B. Ottney II.

Graveside services will be held Saturday, May 22, 2021 at 3:00 PM at West Union Cemetery in Gibsonburg, Ohio. For those unable to attend, livestreaming of her services will be available under the Live Webcasts tab on the funeral home's main page.

Herman-Veh Funeral Home & Cremation Services, Gibsonburg, Ohio, has had the honor of serving the family of Dr. Cain and handling her arrangements.

To order memorial trees or send flowers to the family in memory of Anna Margaret Ottney Cain, please visit our flower store.