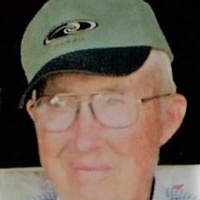 Merlin was born in Woodville Township on Sept. 6, 1921 to Emil and Edith (Gnieser) Schlea.  As a 1939 graduate of Woodville High School, he began his farming career.  During WW II, he enlisted in the Army.  He was trained as an MP, serving in Luzon.  He received the Asiatic-Pacific Theater Ribbon with 1 Bronze star, the Philippine Liberation Ribbon with 1 Bronze Star, the Good Conduct Medal and the Victory and Army of Occupation-Japan Medals.

Merlin was a lifelong farmer, being a member of the American Stabilization and Conservation Service and serving also as a past board member of the former Gibsonburg Farmers’ Elevator, Home Bank Co. and the zoning board.  He worked with the Sandusky County United Mutual Insurance Company and was a member of Gibsonburg’s American Legion Post and the Zion Evangelical Lutheran Church.

Merlin is preceded in death by his parents; wife, Jean; and siblings Carl Schlea and Lois Ruhling.

Visitation will be held Monday, May 29, 4-8 p.m. at the Herman-Veh Funeral Home & Cremation Services, Gibsonburg.  Funeral Services will be Tuesday, May 30 , 11 a.m. at the funeral home with visitation beginning at 10 a.m.  Pastor Blair Miller will officiate.  Burial with Military Rites will follow at West Union Cemetery, Gibsonburg.

Memorial contributions may be directed to Zion Lutheran Church or to the NWOH Chapter of the Alzheimer Association.

To order memorial trees or send flowers to the family in memory of Merlin E. Schlea, please visit our flower store.