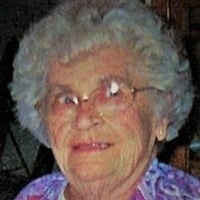 Born on July 7, 1924 in Helena, Thelma was a daughter of Arthur and Clara (Hammer) Ferrenburg.

She married Frank Wasserman at St. Michael’s Catholic Church in Gibsonburg on Sept. 11, 1945.  They were together for nearly 61 years until Frank’s passing on June 28, 2006.  As a homemaker and farmwife, Thelma worked raising her family as well as some time with Ole Zim’s Wagon Shed, the former Rainbow Lanes and at the Erie Proving Grounds during WWII.  Thelma was a member of St. Michael’s Catholic Church, Gibsonburg, the Retired Eagles Activity Club (REAC) and the Helena Community Volunteer Fire Department.  She loved her family and was a great cook and baker.  Thelma enjoyed fishing, bowling and wintering in Bonita Springs, Florida where she played shuffleboard.

Thelma is preceded in death by her parents; husband; granddaughter, Emily Elizabeth Wasserman; a brother; and 3 sisters.

Visitation will be held at the Herman-Veh Funeral Home & Cremation Services, Gibsonburg on Monday, June 12, 2-4 and 6-8 p.m. A Mass of Christian Burial will be said on Tuesday, 10 a.m., at St. Michael’s Catholic Church.  Burial will follow at St. Michael/St. Lawrence Cemetery. Rev. Chris Bazar will officiate.

Memorial contributions may be made to directed to St. Michael’s Catholic Church or to ProMedica Memorial Hospice

To order memorial trees or send flowers to the family in memory of Thelma Wasserman, please visit our flower store.