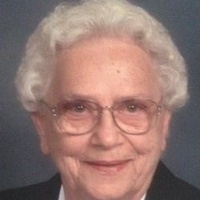 Born on Feb. 28, 1925 in Gibsonburg, Roselin was a daughter of the late Raymond Charles and Johanna Cecelia (Bauer) Lance.  On July 22, 1944, she married Ernest M. Michael at St. Joseph Catholic Church in Fremont.  Together they invested themselves in raising two sons and operating their farm.  They were members of St. John’s Lutheran Church in Fremont and were married for nearly 58 years until Ernie’s passing on Feb. 6, 2002.

Roselin was a homemaker that enjoyed cooking, canning and baking.  She will be remembered for her crocheting of blankets and artful doilies.

Visitation will be Wednesday, July 12, 4-8 p.m., at the Herman-Karlovetz Funeral Home, Fremont where Funeral Services will be on Thursday, July 13, 10:30 a.m.  Certified Celebrant, Maureen Pump, will officiate.

Burial will be at Four Mile House Cemetery, Fremont.

Memorials may be directed to St. John’s Lutheran Church and its Food Committee.


To order memorial trees or send flowers to the family in memory of Roselin Marie Michael, please visit our flower store.