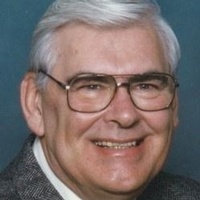 Fremont, Ohio - Larry Jon Miller, 80, died peacefully on August 9, 2017 at his home in Fremont, Ohio surrounded by his loving wife and family at his bedside.  As a devoted Christian, he bravely battled many health problems the last few years and is now at rest in his heavenly home.

Larry was born in Fostoria on February 19, 1937 and raised in Bascom, Ohio.  He was the son of H. Randall and Herma (Matz) Miller.

In his early years, Larry enjoyed working on the farm of his grandfather.  He moved to Fremont, Ohio for his high school years and was an all-state basketball player and had the distinction of being one of the original members of the first baseball team at Fremont Ross High School.   He met his wife, Sally during high school and they were married on May 8, 1954.  After graduating from Fremont Ross High School in 1954, he attended Ohio University, graduating in 1959 with a bachelor's degree in Commerce.

After graduating from college, Larry spent the majority of his professional life as a purchasing manager and plant manager for LeBra Products in Fremont, Ohio and Anderson, South Carolina. During this time period, Larry was a long-time member and council member at St. John’s Lutheran Church and Holy Trinity Lutheran Church in Anderson, South Carolina.  Larry enjoyed this time raising four children with his wife, Sally.  In his free time, he liked to play golf with friends and family, with long-term membership and league play, (lowest handicap of 3) at the Sycamore Hills golf course in Fremont, Ohio.  While in Fremont, Larry was also active in the Exchange Club, past member and secretary of the Junior Chamber of Commerce, past president of the Fremont Y’s Men, member of the Elks club and an official for Fremont recreation basketball and baseball games. Larry was also an avid reader with interests in history and westerns.  He also enjoyed an APBA baseball game he had modified, for over 50 years.

The family lovingly gives thanks to Hospice, Pastor Matt Wheeler and a countless number of family and friends who have prayed, sent cards and visited Larry during his long health battles.  A memorial service will be held at St. John’s Lutheran Church of Fremont, OH on Tuesday, August 15, 2017 at 11:00 a.m.


To order memorial trees or send flowers to the family in memory of Larry Jon Miller, please visit our flower store.