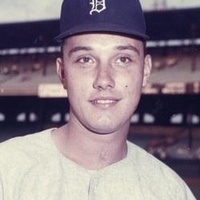 Douglas Eugene Gallagher went to be with his Lord on December 17, 2017 at his home surrounded by family. He was born on February 21, 1940 to Charles and Ruth (McCracken) Gallagher in Fremont.

In 1959 Doug graduated from Fremont Ross High School, where he will be remembered as an outstanding pitcher for the baseball team. He served our country for 7 years, first in the Reserves, then as an Air Force MP being discharged in 1969. Prior to his service Doug played for the Detroit Tiger baseball team, and on opening day, April 9, 1962, he was called up as a relief pitcher for the 7th and 8th innings. At that game he pitched in front of President Kennedy. Later that year on May 22 in Yankee Stadium, he struck out Roger Maris and pitched to Yogi Berra, in which Yogi popped up.

On July 29, 1972 he married Debbie Houghtaling at Grace Lutheran Church, she survives. In 1979 he graduated from Tiffin University with a degree in law enforcement and security.

Doug was a man of Faith and an active member of Grace Community Church. He enjoyed fishing, golfing, and most of all attending his family’s sporting events. Doug was a former member of The Depot Golf League, Fremont Country Club, and Sycamore Golf Course. He was a former baseball coach for the American Legion baseball team, and a 1996 inductee of the Fremont Ross High School Hall of Fame, where he still holds many pitching records. He was an active member of the Detroit Tigers and Major League Alumni Associations, where he participated in many fundraising functions. On March of 2016, Doug was presented a prestigious plaque at the Tigers Alumni Reunion, recognizing his pitching 2 no hitters in the minors.

Doug and his wife, Deb, will be well remembered for being owners and re-opening The Depot, Fremont in August of 1996.

Doug is preceded in death by his parents and great-granddaughter, Hayley Marie Woleslagel.

Visitation will be held on Wednesday, Dec. 20, 2017 from 4-7 p.m. at the Herman-Karlovetz Funeral Home & Cremation Services. Funeral Services celebrating Doug’s life will be held at 10:30 Thursday, Dec. 21, 2017 at Grace Community Church, where there will be a time of gathering, starting at 9:30 a.m. Burial with Military Rites will follow at Greenlawn Memory Gardens, Clyde.

In lieu of flowers, memorial donations may be directed for the start up funding for The Community Fortress, an emergency intake shelter for the homeless based in Fremont; Grace Community Church or Stein Hospice of Sandusky.

To order memorial trees or send flowers to the family in memory of Douglas Eugene Gallagher, please visit our flower store.

A Time of Gathering