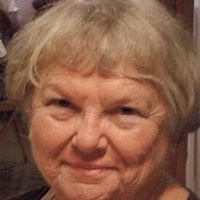 Helen E. Montgomery, 79, of Fremont passed away Thursday, January 25, 2018 at her home surrounded by her family. Helen Elmira Scherf was born to Lydia and W.E. (Dude) Scherf on Friday May 13th, 1938.  She attended Croghan Elementary School, Fremont Middle School and graduated from Fremont Ross High School in 1956.  Her working career started with Quickcut Cutlery in 1955 where she worked until her longtime boyfriend, Walt Montgomery, proposed marriage.  They met when she was nine years old and Walt was twelve delivering the Sunday paper to the Scherf family home on Cottage Street in Fremont.  She used to recall making sure she was dressed extra special and ready extra early for Sunday church, so she could pick up the newspaper and catch the paperboy’s attention.  When agreeing to Walt’s proposal, she also agreed, maybe unsuspectingly, to becoming the daily bookkeeper and Chief Financial Officer of Collinwood Gulf at the corner of Collinwood and East State Street, Walt’s Citgo at the corner of Herbster and East State Street, and Montgomery Car Care at the corner of South Front Street and Hayes Avenue for the next 48 years.  If that weren’t enough, she also worked in the Sandusky County Treasurers office part and full time on and off for two decades.  Helen’s true calling was her joy in being a homemaker, wife, daughter and mom to her sons Mark and Tim.  Helen was the steady, straight-forward and uncompromising rudder on her family’s ship.  Anyone who ever did business with the family knew they had to show up with a well explained bill in order to receive payment.

In 1986 Helen struggled, along with her husband, with the premature death of their youngest son, Timothy Lee. She soldiered on by keeping the books (making sure everything balanced to the penny), and meticulously caring for the summer flower garden on Morrison Road and eventually Sandusky Avenue.  After retirement she and her husband traveled the Continental United States in a 28-foot travel trailer with dear friends enjoying numerous adventures and eventually purchasing a home in New Port Ritchie, Florida.  She also spent time with the ladies in her monthly pot luck “Class of ‘56” group and enjoyed spending time with, and following the antics of, her grandchildren Scherf Walter and Sylas Timothy Montgomery. Although retiring from the service station bookkeeping in 2004, she continued to keep books for her eldest son and daughter-in-law for their local businesses until the day she passed.

Helen’s most gracious accomplishment may well have been the care she provided for her husband, Walt, for decades.  The constant and never-ending need for attention to his diet, medical appointments and emergencies, gave us all many more years of Walt’s presence, humor, and company.

Helen was proceeded in death by her parents, Dude and Lydia Scherf, her son Timothy Lee, and her husband Walt.  She is survived by her eldest son Mark Wilfred and his wife Diane Lebryk Montgomery, and their sons and her grandchildren Scherf Walter and Sylas Timothy Montgomery.

Visitation for Helen will be held on Tuesday, January 30, 2018 at Herman-Karlovetz Funeral Home & Cremation Services from 2-4 p.m. and 6-8 p.m. Funeral Services will be held at the funeral home on Wednesday 10:30 a.m. Burial will follow at Oakwood Cemetery, Fremont.

Memorials may be made to the Fremont Area Foundation or the charity of the donor’s choice.

To order memorial trees or send flowers to the family in memory of Helen E. Montgomery, please visit our flower store.