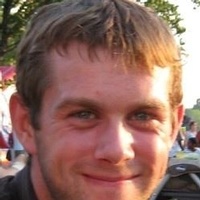 Cory Richard Smith, 33, passed away unexpectedly at his Gibsonburg home on May 25th, 2018.

He was born to Jeannette (Billow) Dougherty and Mark Smith on January 21st, 1985 in Fremont, Ohio. Cory attended Gibsonburg and Lakota school districts over the years, ultimately graduating from Triton High School (Erwin, NC) in 2003.

He married Amber (Olmstead) Smith on December 31, 2005 in Fremont, Ohio. In addition to his parents and wife, Cory leaves behind a loving family, including his children, Camren, Gavin, and Skylar; brother Ryan (Erin) Smith; step brother; Jacob (Melissa) Dougherty; grandparents Harold and Carolyn Billow; stepparents Jeff Dougherty and Diana Dennis; seven aunts and uncles; and ten cousins. He was preceded in death by uncles Harold “Buster” Billow and Gale Hoffman; and grandparents, Glenn and Ruth Smith.

Cory was a doting father and a dedicated husband. In addition to spending time with his kids, you might have found “Cory Richard” catching bluegill, jamming to his favorite music, or beating his cousin Kati at board games. Animals were a big part of Cory’s life, from adventurous hamsters and vicious guinea pigs to chattering birds and three-legged dogs – he loved them all. Cory’s undemanding personality made him an easy friend and his sudden passing leaves many at a loss.

Visitation will be Saturday, June 2, 2018, noon-2 p.m., at the Herman-Veh Funeral Home & Cremation Services, Gibsonburg where Funeral Services will begin at 2 p.m.  Rev. Bill Walk will officiate.  Burial will at a later date.

In lieu of flowers, donations may be directed to Sandusky County Humane Society or to the charity of the donor’s choice.

To order memorial trees or send flowers to the family in memory of Cory Richard Smith, please visit our flower store.