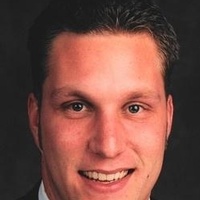 Jason Nicholas Kinn, 44, of McComb, passed away June 26, 2018 at his home with his family in McComb.  He was born on February 16, 1974 in Findlay to Cletus N. and Lori (Long) Kinn.  He married Tiffany Zilles and they were divorced.

During his youth, Jason was a member of the Rocking R Riders 4-H member.  He graduated from McComb High School in 1992 and attended the Ohio State University - Wooster Branch and Owens Technical College in Findlay and later graduated from the Cincinnati College of Mortuary Science in 1998 with a degree in mortuary science.  Jason had been manager of Keller-Ochs-Koch Funeral Home in Fremont and was a past co-owner of Herman-Kinn Funeral Homes in Fremont and Gibsonburg.  While living in Fremont, Jason was involved with Loyal Order of the Moose, Fremont Elks #169, Fremont Exchange Club and was a volunteer for Hospice of Memorial Hospital.  He was a member of Grace Lutheran Church where he was on the Church Council, Columbarium Committee and past Chairman of the Youth Committee.  Jason was also a member of the National Funeral Directors Association, past member of the Sandusky County Fair Ushering Committee, past board member of the Sandusky County YMCA and was a 1999 graduate of the Sandusky County Leadership program.  While living in Cincinnati, Jason worked at Spring Grove Funeral Home and taught at the Cincinnati College of Mortuary Science.  He was an avid Ohio State Buckeyes fan and was the #2 biggest fan of Jon "Big Nut" Peters only after Jon's wife, Terese Peters.

In lieu of flowers, memorial contributions may be made to Bridge Hospice, 15100 Birchaven Lane, Findlay, Ohio 45840.

Condolences may be expressed to the family at www.chiles-lamanfh.com.

Arrangements are under the direction of Chiles-Laman Funeral & Cremation Services, Bluffton.

To order memorial trees or send flowers to the family in memory of Jason Nicholas Kinn, please visit our flower store.